UK startup valuations are booming and there’s a good reason why.

There’s a lot of money about. How do I know this? Well I first wanted to find out more when we saw more and more deals coming to us that were exceeding the £10m valuation limit our Access fund had set. These all came from our super angel partners who typically target younger exciting companies that have yet to get a lot of traction. Our Venture Partner – Miruna Girtu check her out here – she writes frequently and is generally brilliant – had been hearing from almost everyone that valuations were on the up. Our end of year survey to our super angels provided further corroboration.

Our strategy has always been to get in early and build a diversified portfolio of deals by investing alongside angels with a proven track record. But what do you count as early? We always revert to data in our investing strategy so we analysed the full market of deals and saw that, with our model, we would maximise returns by focusing on deals that were valued at under £10m. We have to update these as the market changes and we get new data sets, and so I wanted to see what was going on in 2021.

Let’s start with looking at valuations. I’ve reformatted some data from Beauhurst’s The Deal report for 2021 above. Valuations are booming. The median valuation at the growth stage is around 10X higher than it was in 2011. Venture and Seed have grown significantly too. The median seed valuation is now £2.4m. These are typically companies without any revenue or necessarily even a market-ready product. Now I’m not commenting on whether these are justified or not. You’d need a bigger market study looking at historical growth and returns. And probably look at US data too, as they’ve been in this game for longer.

The main take-away from the above graph is that valuations are indeed growing at all levels of the market, although even more so at the top end of the market with more established startups.

There’s two drivers of any valuation for a startup. The first is obviously performance. So it is possible that there has been a glut of high performing startups with great metrics and promise that have been able to convince higher valuations from investors. I don’t think this is completely implausible, but the speed at which valuations have grown suggests it’s unlikely – you don’t just start producing a whole cohort of very successful startups in a couple of years.

The second driver is also obvious – sources of capital. The more investors there are with lots of capital to deploy, the higher the valuations as everyone chases the best deals. At later stage rounds, it is VC funds that deploy the majority of capital so I wanted to see how much these funds have been raising. It’s not easy to find the full amount of funds raised by VCs in the UK, and there are foreign funds which invest in the UK, but we do have two data sets to look at for the UK.

The first is Venture Capital Trusts. These funds typically invest in Series A-C companies and look to deploy the funds within 12-24 months. It does exclude some of your larger VCs such as Atomico but it is still an indicator and these are funds which need to be deployed. I’ll explain why this is important later. As you can see, the total raised by VCTs in 2021 was almost 450% higher than it was in 2009. The Telegraph has reported that VCTs have already seen £580m raised in 2021, more than double the £280m raised in the same period in 2021. 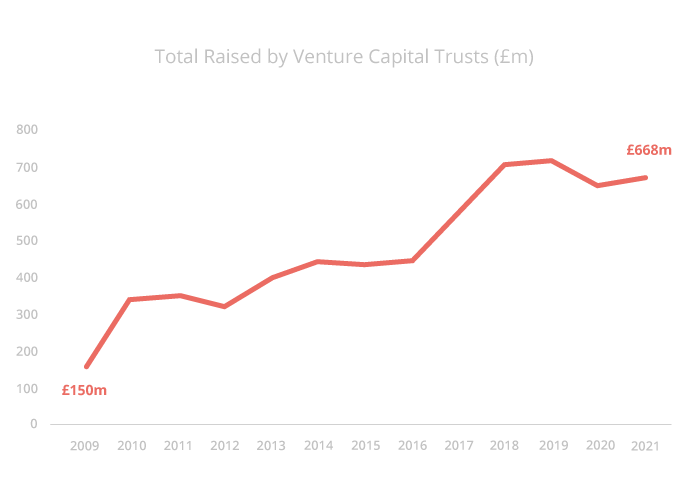 The second data point is collected from the BVCA and their members (which includes most of the large funds). Again we can see significant growth in total funds raised (and ready to be deployed). Approximately 450% growth again since 2010. 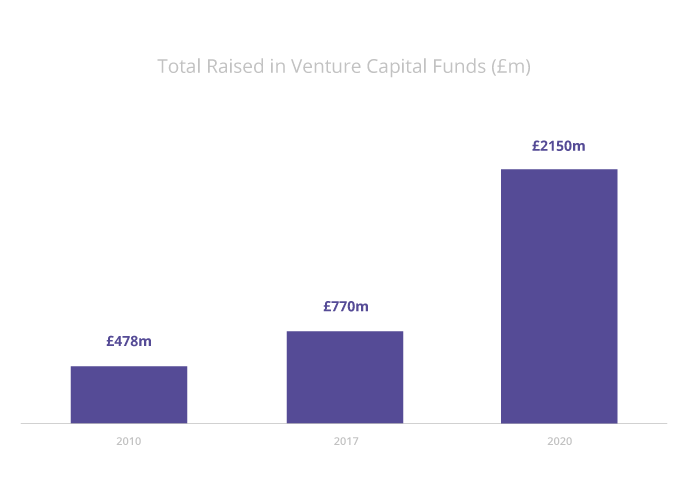 Most of these funds have set strategies of investing in 6-8 deals. Therefore as they raise more, the cheque size they look to write grows as opposed to investing in more deals. They may hold more funds back for following into the same 6-8 companies, and in those cases there is the incentive to encourage a higher valuation and boost their own portfolios. Moreover, it’s important to remember that many of these funds need to deploy this capital. Although the top funds probably have their pick of the deals, there is a fat middle which will be willing to go into any decent looking A or B series round and ask to invest a few million. The company doesn’t want to give up too much equity and so can increase their valuation appropriately – pleasing early shareholders and the employees. The fund itself also then feels like it’s investing in a mature startup and giving it the capital it needs to grow.

On the surface, there is no real disadvantage to increasing your valuation. I will point out that as a startup there actually is a downside, just not an obvious one. At a higher valuation, those investors will then put a lot of pressure on to reach even greater metrics and drive an 10X valuation on their round. If you fail to hit the growth targets required for a 10X increase, you may see fewer investors willing to join the next round as you can't justify an even higher valuation.

Overall, I’m not commenting on whether higher valuations are bad – more money into the startup ecosystem can be a very good thing – I’m just considering the mechanics of how it happens. The power law also means that if you do manage to get into the right deals, they really do have a lot of scope for growth.

The growth in valuations in later rounds has a knock-on effect in the earlier rounds. As valuations grow in late stage, larger ticket investors start to look at earlier startups to ‘get in early’ when it’s cheap and there is larger runway for growth. But they still need to write relatively large cheques, and the startups are welcome to oblige by increasing their valuation.

The final data to look at is foreign investment. The figures below come from Technation and show some very large figures coming into the UK startup ecosystem. However, it should be noted that much of this investment goes into very late stage startup deals – 76% of rounds $250m+ included a non-UK investor in 2020. Beauhurst reports similar numbers with 87% of £50m+ deals in 2021 including a foreign investor. The increased attention the UK system is getting from these foreign investors with massive pockets is clearly impacting valuations too. 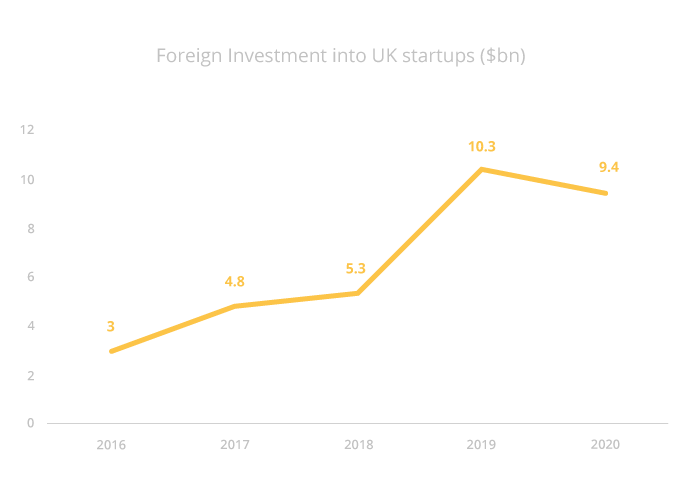 So yes, the short answer is that there is a lot more money coming into the ecosystem. It’s possible to write a whole other article on why this is but I’d like to think a contributing factor is that it’s a result of the UK startup ecosystem growing and there being more and more high potential startups that are just starting to get more attention from the broader market. Our own research has shown that the startup market itself grows relatively consistently and a diversified approach can take advantage of it.

Of course, there may also be a bull-whip effect whereby investors begin to baulk at the large multiples in these rounds and look to other, cheaper, markets or sectors. In the US there have been a few articles suggesting a correction in startup valuations. Here is just one, although I will note that our own analysis has not found a correlation between tech stock prices and venture capital valuations.

In the meantime, as long as we see these late stage funds continue to raise larger amounts of capital, I would expect the valuations to keep growing. This will continue to have a knock on affect on earlier stages and we’ll probably see more seed focussed funds too. We'll keep watching this space and let you know.