Why the power law matters in VC investing. 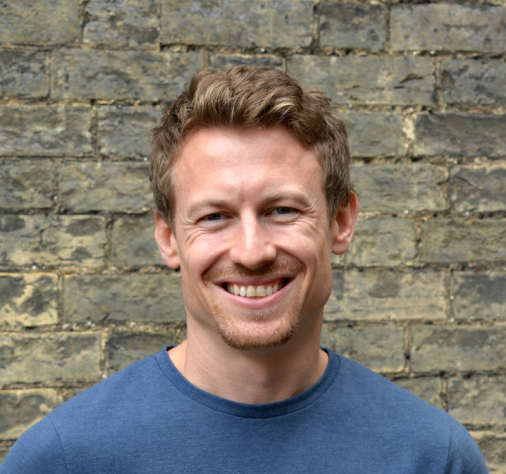 The power law is not normal

SyndicateRoom’s most recent white paper analysed UK startup data and found that it adheres to a power law distribution. What does this mean, and how can it inform our approach to investing in startups?

A power law distribution is very different to a normal distribution (also called Gaussian or bell curve). Height is normally distributed with most values near the average height. We would be very surprised to see someone who is ten feet tall.

In power law systems, the majority of values sit at one end of the spectrum and there is a long tail of outlier values extending away indefinitely (yes, indefinitely). Small outcomes are most likely and large outcomes are less likely. A good example here is wealth distribution. We know that 83% of the world population has less than $100k in wealth. There is a long tail of individuals with wealth greater than $100k. But in contrast to heights, we would not find it unusual to find someone at $800k (10X the average), or even at $1b (12,500X the average, 70,000 ft tall in the height example).

For those familiar with startup investing, you will immediately notice a similarity. It is often said that most startup investments fail and only a small percentage provide massive returns. That is why it is widely regarded that venture capital returns follow the power law - but is that empirically true and what are the implications of an actual power law distribution on the real data? We completed this analysis in our latest white paper, but many angel investors will tell you it’s true in their portfolios too:

“The 80/20 rule and the empirical power law for venture investing is eerily borne out by my own portfolio of 145 angel investments over the past 10 years. 20% of my portfolio (i.e. 29 companies) account for 82.4% of the portfolio value.” – Chris Mairs, SyndicateRoom super angel.

How fat is the tail?

Let’s avoid the maths and just say that the tail of the power law distribution is what is important. When the tail is fatter, more of the total population value lives in the tail where values are higher. Looking at wealth distribution again (because it’s a mental model we all are familiar with), a fat tail would mean wealth is more evenly distributed – there are more people earning large amounts even though the majority of people are still at the other end of the distribution.

What we want to know for startup investing is how fat the tail is for startup returns. The fatter the tail, the more even the spread of startups with 10X (or more) returns. A thin or fat tail has big implications for sampling of the data i.e. choosing startups to invest in. If the tail is very fat there is no standard deviation or average when you invest. Every now and again you will pick one of the very big values in the tail and it will massively throw off your average. 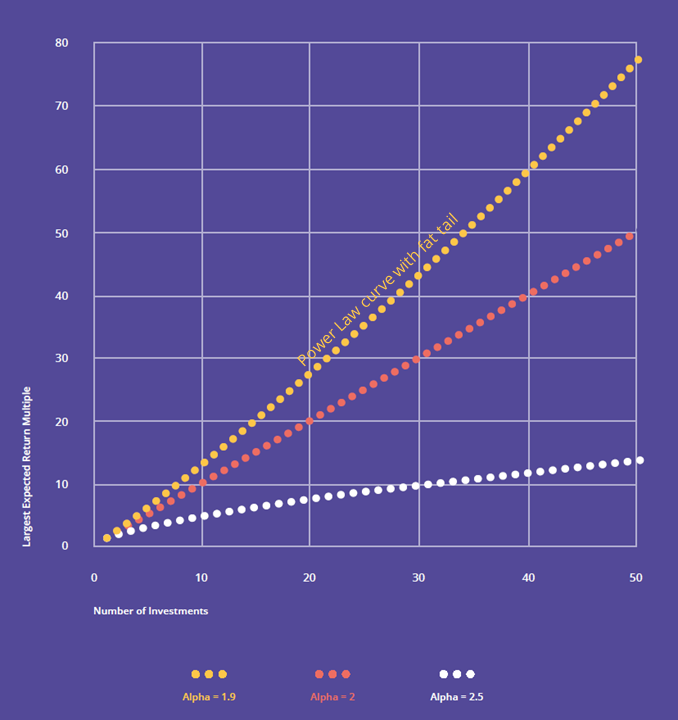 UK returns fit a power law distribution with a slope of 1.8 – meaning larger portfolios are better

We did the hard work and completed power law fit analysis on UK Companies House data. The full detail is in the white paper, but the main takeaway here is that the data does follow a power law distribution. As far as we are aware, it’s the first analysis done on UK data and on base level data (i.e. not on announced figures or venture firm reported figures).

Importantly, we found that the tail is indeed fat! It adheres to a power law distribution with an alpha (slope) of 1.8. If you make your investments from this distribution, making more investments at random will increase your portfolio’s expected average return. Moreover, the opportunity cost of missing one of the successful investments is, theoretically, infinite. As one of our angel co-investors puts it, “Too many people invest 50k in five companies rather than 5k in 50 companies.” Chris Adelsbach, SyndicateRoom super angel

I am not proposing you invest in every single company. You would alter the investment population by introducing a whole cohort of loss-making investments. You would be better off setting down some minimum criteria and then investing in as many as you can that meet that criteria. If you invest large sums though, that may affect the system.

Furthermore, the market is not open or transparent, and it is practically unfeasible to get into each company’s round and impossible to invest scattergun into the whole population. There is no list of ongoing rounds which you can pick from randomly or check against thresholds to invest into. Even if you did have a list, a hot round will be harder to get into and investors would need some connection with the founder, or early investors to get into it. Our own solution has been to partner with angel investors with access to the top end of deal flow in the market.

“Spend enough time building relations to see good deal flow, spend enough time and energy building a reputation for good advice so you’re allowed to write small tickets on desirable cap tables, and don’t spend too much time on due diligence beyond a very simple thesis. Then write as many cheques as you can afford”. – Chris Mairs, SyndicateRoom super angel.

Deal flow sourcing is critical. How you design your deal flow machine will create your own personal power law of deals that make it your way. The nature of this market is that you will always get a high number of failures in the number of deals you see. The obvious advice here is that you want to increase your access to the fat tail of deals in the underlying population. That will create your own flow of deals that have a fat tail and then again, more deals is better.

“When people ask me for my top Angel investing tips I generally condense it down to…invest in a sector and region where you have access to great deal flow and invest an amount in each company that will allow you to invest in at least 50 more.” – Chris Adelsbach, SyndicateRoom super angel.

As a final note, we did a quick analysis of deals at higher valuations, as a proxy for later stage deals. What we found is that the tail becomes thinner at higher valuations with a significantly different slope. The average of your largest predicted return will be lower than the early stages. This makes sense, as the later stage rounds have less growth runway (i.e. go from £10m to £100m instead of from £1m to £100m). However, investments will also have a different risk profile and there are more implications for how you should build your portfolio at that stage. A big takeaway for us, is that the slope is so different that it could represent a different asset class altogether and you need to consider that when building a portfolio of mixed stages.

The new white paper makes a case for a more in depth understanding of the power law to be practised by all startup investors. The power law distribution is weird and does not fit our normal mental models. Most investors will accept that their returns will come from a few winners and yet continue to invest in small portfolios of 8-10 companies. New investors will be restricted to the earliest stages (as successful series B and C companies do not take on new small investors) and therefore invest when the alpha is low. For these early investors, large portfolios are key. Beyond the analysis shown here, our data has found that the angel investors with the most consistent and highest returns, are those with larger portfolios.

This asset class has massive potential in the creation of wealth. The future success stories of huge wealth creation will come from the population of startups. But in most cases, investors are unable to access this meaningful sector of the economy where wealth is generated. This is not to say it is not risky investing or that investor warnings should be removed. Individual investments are incredibly risky and we’ve shown that any individual investment, or even small portfolio, is likely to lose money. We believe simply that there is potential to expand access to an indexed startup investing approach for those investors who have a solid portfolio of investments in other assets.

That is part of our mission with the Access Fund and why we keep the entry point relatively low. Moreover, our more indexed approach to startup investing will increase the statistically expected return by investing in 50 startups every year. This is an inherently less risky approach. This model enables more investors to participate in this sector of wealth creation, whilst reducing the risk involved. All thanks to a deeper understanding of the power law. 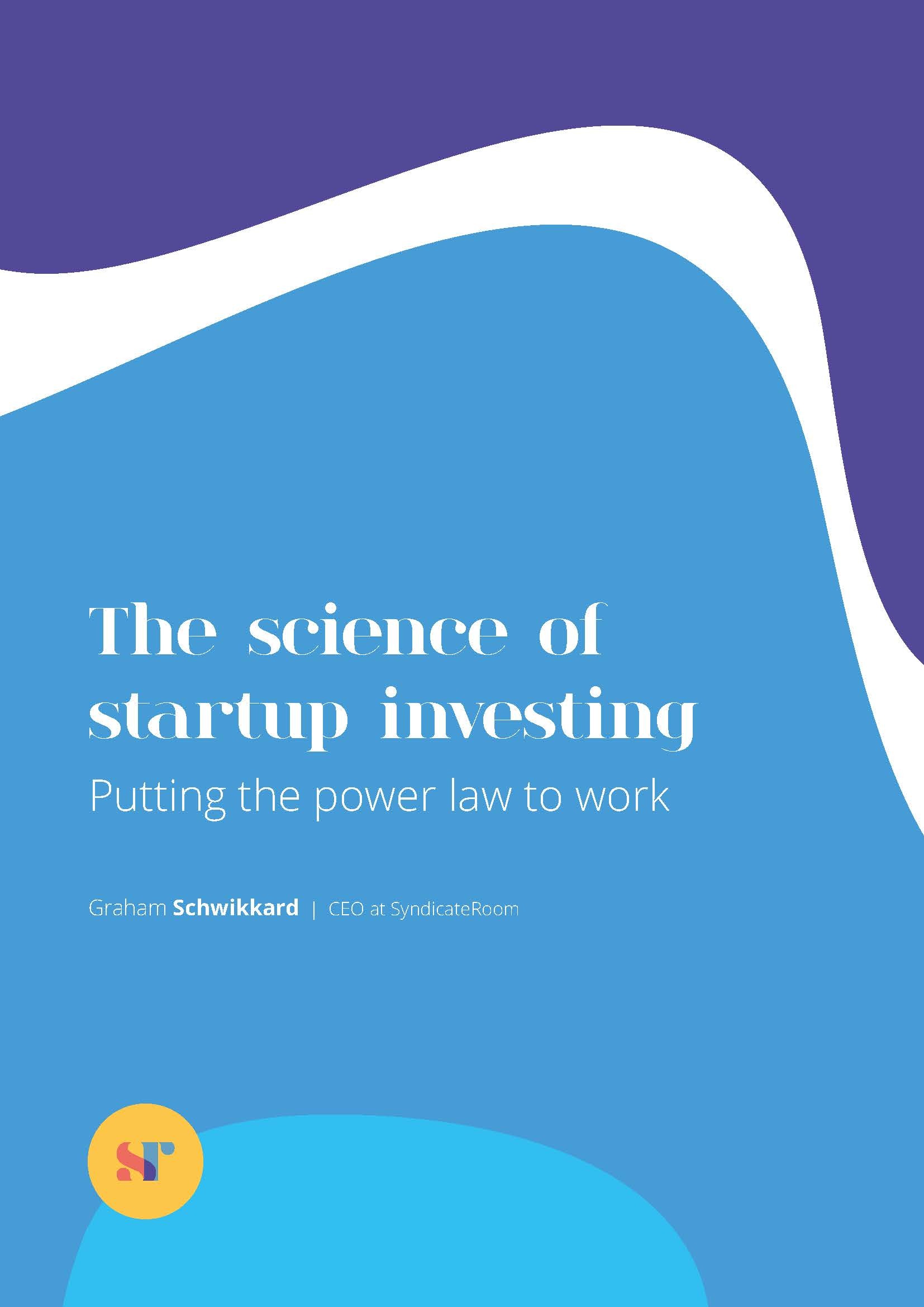