Every five seconds someone, somewhere in the world, goes blind. In the UK alone, 100 people a day begin to lose their sight. Re-Vana Therapeutics seeks to mitigate the rising tide of blindness worldwide by developing its innovative ophthalmic drug-delivery system.

We caught up with Michael O’Rourke, CEO and Co-founder of Re-Vana Therapeutics, for a personal insight into the what drove him to specialise in ophthalmology drug development.

Michael has extensive global ophthalmology industry experience, and has both presented and published on drug delivery within ophthalmology at congresses and within respected journals. He is a past Chairman of The Foundation Board for The Lions Eye Institute, guest speaker on strategic planning at the University of Tampa, Florida, and was part-time marketing lecturer at Trent Polytechnic in Nottingham, UK.

Michael: I'm originally from Glasgow, studied chemistry at the Paisley College of Technology, then completed post-graduate studies in secondary teaching and later in marketing.

I've worked in the life sciences industry for 35 years and specifically in 'drug delivery' for over 30 years across ophthalmology, periodontal and pulmonary markets, including strategy development and global commercialisation. My previous companies include 3M Pharma, Pfizer, Alza, Chiron Vision and Bausch + Lomb. I worked in the UK until 1998, then transferred to the USA with my company at the time, Bausch + Lomb. Initially located in California, then Rochester, New York and finally Tampa, Florida, where I was General Manager running a $200m Bausch + Lomb US pharmaceuticals division.

In 1996 I led the European team that launched the world’s first intra-ocular drug-delivery technology in Europe, Vitrasert®, and then the world's second, Retisert®, in the USA in 2005. Additional drug-delivery experience includes Alza International, establishing their European division, and launching the world’s first sustained release technology treating periodontitis. At 3M I was based in Glasgow, working as a medical representative, then in marketing, based out of Loughborough.

To date, I've managed 28 brands, led 13 product launches, structured/negotiated multiple business deals and been a team member in 18 device/drug approvals. Re-Vana is the third startup company I have worked with directly, but I have consulted with many others.

My passion for the past 25 years has been the development and commercialisation of new ophthalmic products, hence my excitement about Re-Vana. I work with Re-Vana in Belfast but I currently reside in Tampa, Florida, thus offering a unique UK–USA network for a startup company. Many if not most startups now work virtually, so it's a successful way to operate.

I am married to my wife, Grainne, and have three children: Orlagh, Ruari and Ciaran.

Michael with his family at the NY Marathon, 2014.

What gave you the idea for Re-Vana and what differentiates it from existing platforms?

The original co-founders, Dr Raj Thakur and Professor David Jones, recognised the significant market need for new ocular drug delivery systems. Through their research, they developed the idea to photo crosslink different types of polymers that could also contain and deliver drugs for one to 12 months. Two have been developed to date – OcuLief, an injectable gel, and EyeLief, a pre-formed implant.

The key differentiator is the ability to deliver both small AND large molecules like proteins – there are no current approved products that can deliver proteins on a sustained release basis, hence the opportunity. 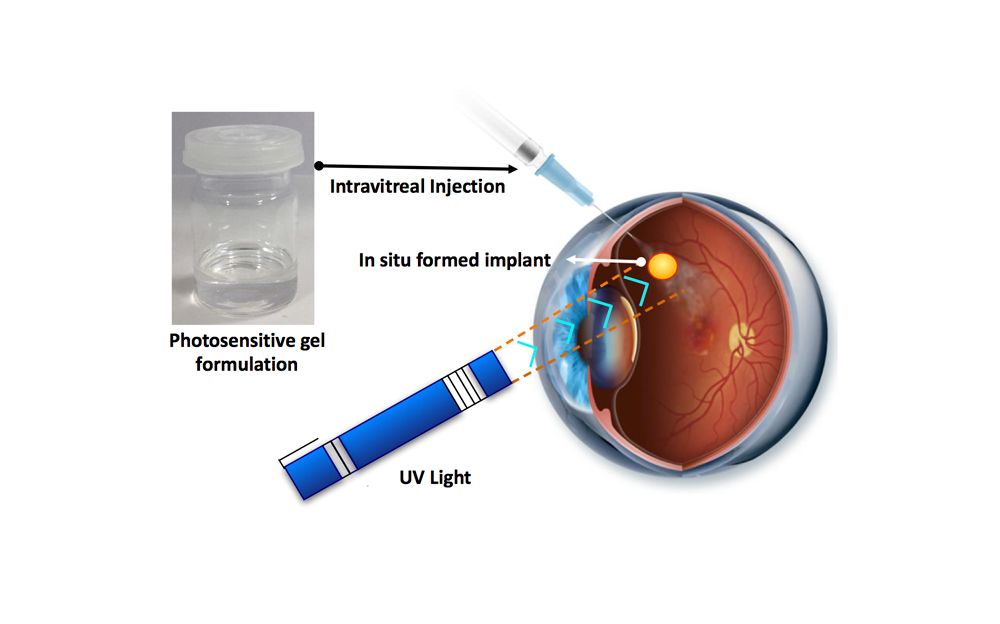 Why did you start Re-Vana – did your inspiration stem from passion, frustration or something else?

Re-Vana was originally founded by our CSO Dr Raj Thakur and board member Professor David Jones. They had the entrepreneurial spirit and vision to start Re-Vana. I came in later, so it's an honor and just great working with them to help build the company.

I'd say it was down to passion.


Do you and your co-founder, Raj, get on well? How did you find one another, and what made you decide you wanted to partner up?

Yes, all great – we work very closely together and in all our meetings and presentations to date, both of us present and participate. I cover the business side and Raj is the technical scientific expert, so it works well.

I had known Raj for a number of years and I guess we were connected with our mutual passion for ocular drug delivery.


Being an entrepreneur is no easy life and requires you to tackle new challenges on a daily basis. What helps you day-to-day and motivates you to keep going?

Having worked for the first 25 years in major multi-national companies, I was really looking for a whole new opportunity and that led to me to working with startups. I also founded a consulting company, Scotia Vision, where the majority of my clients were startups in both the USA and Europe. I was impressed with many of the entrepreneurs I met, so I learned from them. It was never an easy task, but the desire to succeed and reach the next milestone always overcame all the challenges.

The motivation is simple: having witnessed the dramatic impact that visual acuity loss or blindness can have on a patient's life, the drive is there to develop new drug-delivery therapeutics to enhance treatment and reduce the burden of frequent injections into the eye.

My father died in 1980 watching a football game in Glasgow, and I became closely attached to an uncle, an incredibly bright and smart man who became a mentor. Tragically, I had to stand by and watch him gradually suffer from complete blindness in both eyes with wet macular degeneration. So the drive was confirmed then to try and make a difference going forward.

In 1996 when we launched Vitrasert, it was the world's first intra-ocular drug-delivery device, treating a late-onset eye disease in HIV patients called CMV Retinitis. So instead of cumbersome infusions or systemic medicines, we could target local therapy with an implant straight into the eye, delivering the drug for four to six months. So no more need for burdensome treatments. When CMV Retinitis was diagnosed, the HIV patient only had about 12–18 months to live. However, the impact that 'drug delivery' had in helping preserve their vision with some enhanced quality of life in their remaining months was impactful.

In addition, knowing what we are developing at Re-Vana is the type of technology that major pharma companies are looking for is incredibly motivational in itself.


Success is wonderful, but failure builds character. What mistakes have you learned from in your journey to establish Re-Vana?

Probably too many to mention over my career, but at Bausch + Lomb we were always advised by the CEO that 'business never goes in a straight line'. So just when you think you're on track, something goes wrong. The need for contingency planning then is essential to a startup – and be prepared to take a lot of punches along the way.

John Lennon wrote in one of his songs, 'Life is what you are living while you are busy making other plans' – so just expect the unexpected and plan for it.

That said, we are building a great team and have very supportive and committed investors, including Qubis and TechStart.


What is the greatest contribution you've had from an investor – cash, contacts, advice or something else? And what feedback have you had?

There are really too many investors to mention, but an investor who is also prepared to roll up his/her sleeves and take an active role in helping to build the business is someone I like working with.

The best feedback is always to have a very clear 'value proposition' for your product or service – it really does need to be better than and different from anyone else's.

What are you most proud of, professionally or otherwise?

Professionally, in my early career, it was definitely when I was at 3M Pharma as a medical representative, winning the No.1 UK/Ireland sales prize two years in a row. Given that I was selling laxatives, heart drugs and asthma inhalers – it was a brilliant time and company to work for.

Later, it was successfully launching two out of the four drug-delivery products ever approved in the world, and later again, leading the USA Bausch + Lomb pharma business and being responsible for 150 employees.

Otherwise, obviously I am very proud of my family and I guess running the New York Marathon in 2014, raising $7,500 for a local eye bank.

What is the best piece of entrepreneurial advice you've ever received, and what's the best you've given?

Received: Define your idea then have paper, pen and patent at the ready – that's how it all starts.

Given: If you rely 100% on your business plan, you will fail – you have to be adaptable to the market and the changing environment.


What is your vision for Re-Vana's future?

To have Re-Vana technology on the market with either a small or large molecule treating a blinding eye disease.

An introduction to SyndicateRoom with Co-Founder Tom Britton

Founder interview with Rick Brownlow: From poacher to gamekeeper

Cars as a service: Interview with Wagonex Founder Toby Kernon