New Beauhurst data has some interesting insights for those who invest in tech companies.

Last week we looked at some interesting data from Rise of the growth hunters, which indicated that early-stage companies scored a 33% compound annual growth rate (CAGR) since 2011 – compared to 5% for London Stock Exchange main market companies.

This week, we’re going to dig a little deeper to see what type of company has been performing the most well.

The data, gathered by Beauhurst, once agains concerns a cohort of 578 early-stage UK companies that received equity investment via seed or venture capital in 2011. Of these, 416 – roughly two-thirds – are technology companies.

The below graphs show a comparison of technology and non-tech companies valuations in 2011 vs their respective fair value figures in 2016, with each line indicating a single company. 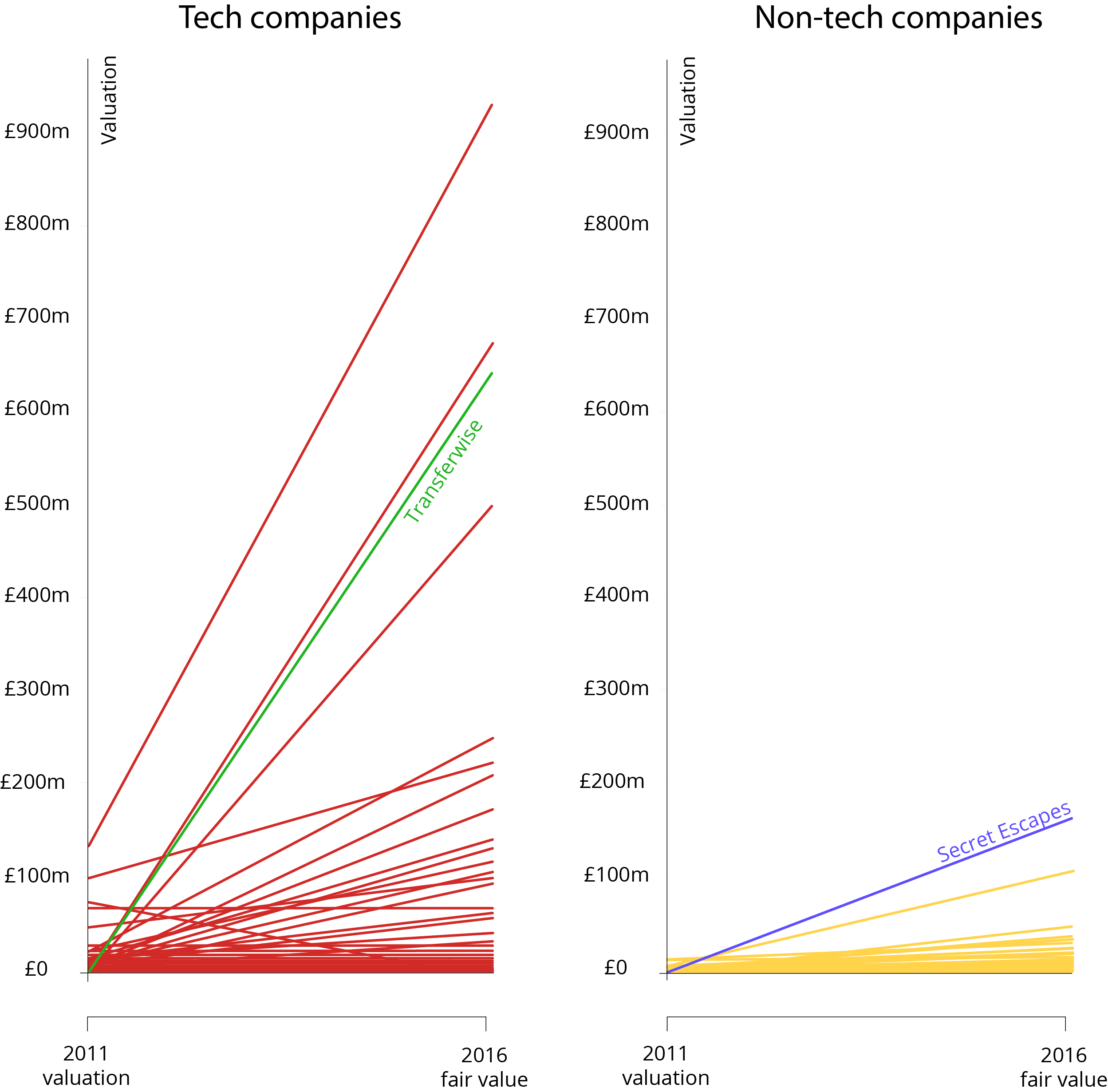 The best-performing tech company in the cohort was Transferwise (the green plot to the left), whose valuation grew by £642m in the period – demonstrating a CAGR of 262%.

For non-tech, the best-performing company in the was Secret Escapes (the blue plot to the right), whose valuation grew by £163m in the period – a CAGR of 149%.

In comparison, non-tech companies performed less well than tech companies in aggregate. In 2011 the non-tech cohort, which comprised 162 companies, was valued at a total of £255m. Its valuation has grown by £673m to £928m in 2016. This makes for an underlying CAGR of 28% – which is still far higher than the 5% CAGR found for London Stock Exchange main market companies.

UK tech and tech-enabled businesses are growing, on average, at double the rate of any other sector in the UK, and we’re proud that Octopus Ventures and its portfolio are being recognised as leaders in the space. The UK tech sector is one of the most exciting in the world, with global leadership across a number of sectors including [Fintech](/invest-in-startups/fintech) and AI, as evidenced recently by the acquisitions of SwiftKey by Microsoft and Magic Pony by Twitter.

Further findings as well as the methodology used for obtaining these results may be found in Rise of the growth hunters, the complete PDF of which is available free to download here. We hope you find it both insightful and, in this uncertain economic climate, inspiring. And remember: we’d love to hear what you think.

National FCA survey: Your chance to shape the industry