EIS vs VCT - the differences and which is right for you.

With investments, your capital is at risk.
View our EIS fund

In the case of EIS, investors also stand to benefit from additional downside tax relief should the investment not go according to plan. But it’s important to understand the difference between these two approaches to investing in startups, and to choose whichever best suits your investment style, and your budget.

Below we compare and contrast the investment schemes in an effort to help you choose which may be a better fit for your portfolio. As EIS tax relief can be achieved through direct investment into a qualifying company, or through investing in an EIS fund, we have opted to compare EIS funds with Venture Capital Trusts as they are more direct comparisons.

Spoiler alert: depending on your level of risk appetite, a combination of both may bring the diversification to your portfolio that you seek.

A background on EIS and VCT.

Both EIS and VCTs were established in the mid 1990s (1994 and 1995 respectively) and, while the structures are slightly different, their aims are similar. Both were designed to encourage private investment into early stage businesses in the UK by offering generous tax reliefs.

To date, more than £20bn has been raised through EIS, funding close to 30,000 companies. Around £7bn has been invested in VCTs so far, and VCT-backed companies have created more than 27,000 jobs.

Weighing up the pros and cons of each. 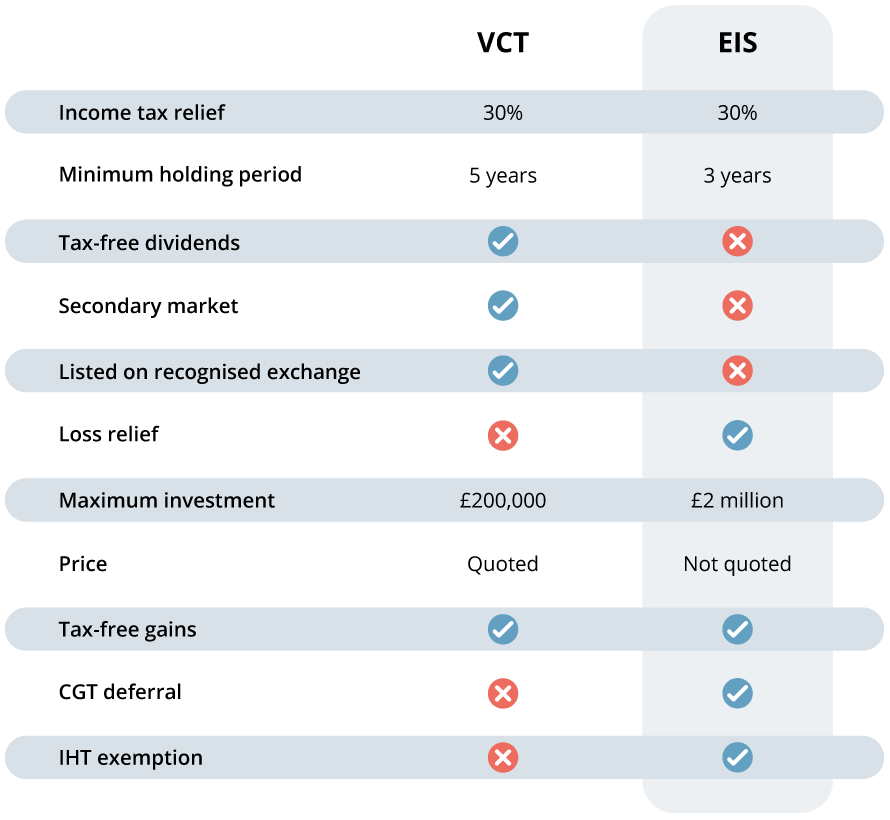 The structure of an EIS fund vs a VCT.

The most notable difference between making an EIS investment and purchasing shares in a VCT is the structure of the investment itself.

With an EIS investment, which may be made directly to the eligible company, or through an EIS fund, your money is directly invested and you acquire the monetary rights to shares in the companies you’ve invested in.

When the company you’ve invested in achieves an exit, such as its sale to another company, you are paid out the value of the shares you hold at the exit price, minus any performance fees the fund manager charges.

With an investment into a venture capital trust, you are buying shares of the trust itself and do not hold the monetary rights to the shares of any underlying companies invested in by the trust.

Because of this, should an underlying company achieve an exit, or should the value of listed shares held by the trust increase, there is no obligation by the trust to pay out any amount to its shareholders. Some VCTs do pay dividends to shareholders, and, as the shares of VCTs are listed on the stock exchange, there is a possibility of selling the shares on the market should you wish to cash in. More on this later.

The tax reliefs on offer.

The tax reliefs available for both EIS and VCT are only available on the purchase of new shares issued, not shares purchased from the stock market.

The holding period for EIS shares before tax reliefs can be claimed is 3 years, while for VCTs this rises to 5 years. Tax relief received on shares sold before the end of the respective holding periods may be clawed back by HMRC.

Both EIS investments and VCTs allow income-tax relief of 30% on newly issued shares, but where EIS investments give investors the option to carry back tax relief to the previous tax year under certain conditions, this is not possible with VCT shares.

Both EIS investments and VCTs are exempt from CGT on sale of shares, for EIS this only applies at the end of the 3 year holding period.

EIS investments also let investors defer the payment of CGT on disposal of other assets by investing the profit from the sale of those assets into an EIS fund or direct EIS shares. The capital gains tax for the initial asset will need to be paid once the EIS investments crystalise.

It is worth noting that dividends are much more commonly paid by VCTs than companies EIS funds tend to invest in.

In the event that one or more of the companies goes bust or is sold at a loss, EIS offers investors loss relief on shares held in those companies.

The loss relief is calculated by multiplying your tax rate (40 or 45%) by the amount an investor has invested in a particular company less the initial income tax relief they received on that investment.

EIS investments qualify for business relief for IHT, so they are free of IHT after the shares have been held for a minimum of two years.

VCTs do not have this benefit and are taxable as they will form part of your estate. But,the dividends paid by your VCT will remain tax free should your beneficiaries choose to keep the shares once inherited.

Both EIS funds and VCT shares should be treated as illiquid investments. While VCTs are listed on the stock exchange, the tax reliefs are not offered on shares purchased on the market, only new share issues. For this reason the trading volume for these shares is often low.

The administrative load that comes with claiming EIS tax reliefs is far lighter than many believe. It’s a common myth that investors are required to file a separate claim for each EIS company they invest in, for example, but this is not the case. The two main requirements are managing EIS certificates, and keeping a list of the amounts you’ve invested into which companies.

SyndicateRoom's Access EIS fund handles both of these for you by storing EIS certificates digitally and providing its investors with all the investment data HMRC requires, which can be easily downloaded and attached to your self-assessment

In comparison to more traditional EIS funds or direct investments, claiming tax relief on VCTs is quite straightforward. The tax relief is delivered in the form of a tax credit for you to set against your overall income-tax liability. You claim the relief through your self-assessment tax return for the tax year in which the shares were issued. And you don't even have to wait until you send in your tax return; you can just ask HMRC to adjust your tax code or you can ask for a tax refund.

Which companies qualify for EIS and VCT relief?

For EIS, when the shares are issued, the company must:

For VCT it is quite similar to EIS:

For VCTs, when a company is deemed to be knowledge-intensive they can:

Which is right for you? 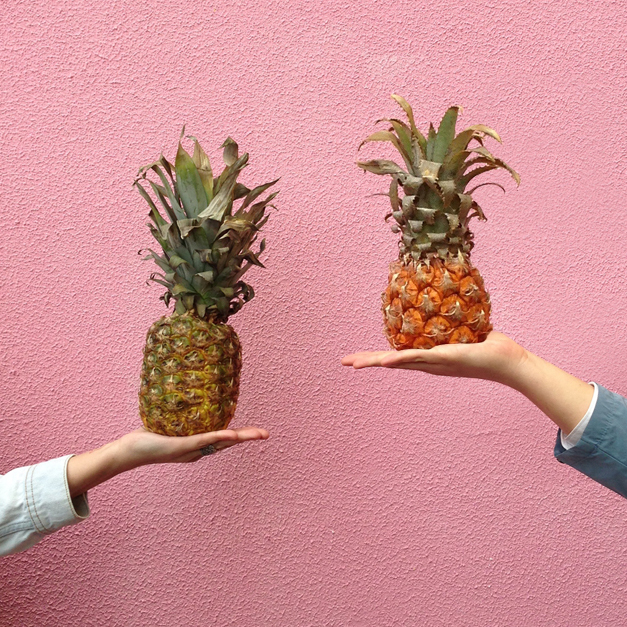 While we cannot advise you which to choose, we can outline the types of investors that might prefer the various defining features of EIS or VCTs.

EIS offers the potential for a larger, but longer-term return on investment, but will not pay regular dividends. It’s high investment allowance means that it can be a useful facility for retirement planning, particularly when compared to the UK’s meagre pension allowance. With this in mind, the shorter three-year holding period on EIS shares means you start benefiting from tax reliefs faster. In short, EIS suits investors:

When you invest in a VCT, you have the potential to receive regular tax-free dividends if the portfolio does well, meaning it can function as a source of income. You also buy into an existing portfolio, meaning you have a clearer idea of what you’re investing in before you commit your money. You do have to wait 5 years before investments qualify for tax relief however. VCTs are more suited to investors who:

There’s nothing to prevent investors holding investments in both EIS companies and VCTs, meaning you get the best of both worlds: the potential for regular tax-free dividends from the VCT, and the potential for significant returns upon the exit or acquisition of EIS portfolio companies.

The information on this page does not constitute financial advice and is provided on an information basis only, based on research using the following sources: