How does a disruptive technology become embedded in consumer’s daily lives? How can you navigate the complex issue of behaviour change to understand how to encourage real engagement? And, as an investor, what should you be looking for in the businesses creating these technologies? 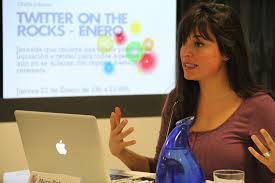 Mara Balestrini might have some of the answers. She is a Human Computer Interaction (HCI) expert and partner and Director of Research at Ideas for Change, where she consults on innovation, user engagement, open and collaborative strategies, and exponential growth models.

She claims firstly, that products which are simply too disruptive, that push consumers too hard are unlikely to achieve immediate success. 'Asking people to radically change behaviours that are already accepted and embedded in our culture and daily practices is a bad strategy,' she said.

'Intuitive interaction with technology happens due to the unconscious application of prior knowledge by the user. We use conceptual metaphors to relate to and interact with the world. Understanding such metaphors is key to the design of technologies that users will easily appropriate: - for example, we all know that a watch is something you wear on your wrist. So, if I make a watch that is embedded in a shoe it might be useful but as a concept, it is way too disruptive and is too different to their normal activity.'

Instead, innovative technologies need to slot into people’s daily routines in a non-disruptive way and although truly disruptive technology will require some behaviour change, despite the rise of big-bang overnight success stories, real consumer adoption is a process and it takes time.

For investors especially this should be a major consideration and one of the biggest questions to ask when investing in technological innovation is often how long the product will be relevant, or how valuable it will be to its consumers.

One of the most important considerations according to Balestrini is the concept of the ‘novelty effect’ - a surge of interest all consumers have in a product thanks to their initial curiosity in it.

'Users tend to immediately engage with new technologies due to an initial interest or curiosity and it increases engagement. So, if you are testing how users relate to a technology, some data that has been collected in the earliest stages of testing might be misleading, because it is likely that most of the behaviours that emerge are caused by this effect, rather than some genuine engagement.'

For early-stage companies this means that extensive and longer-term testing is necessary to truly understand how valuable an innovation can be after that initial period of interest has worn off.

Balestrini uses the example of quantified self technologies such as a Fitbit to highlight the pressing issue in terms of the timeframe of the novelty factor.

'With a Fitbit, a lot of people stop using it after just a few months. Why? Because for most people, a month is enough time for them to gain value from it.

'The most basic version helps you count steps, so in one month you’ve probably gone through all stages of your daily routine and assessed how much you typically walk on a daily basis - you’ve learned what you needed to from the tool. So why would you keep using it to monitor the same activity?'

Of course novelty is not all bad - it makes consumers curious and attracts them to the new technology - but it does mean that constant iteration and innovation becomes necessary. The question here is what can technology designers do to tackle this?

However for most technologies, Balestrini says there are three options to maintain consumer engagement.

'Firstly, if you have proprietary technologies, it’s up to you to create new features and updates that will keep the user interested.' For example, building social features which increase engagement through social norms and peer pressure. Following your friends, or sharing your activity adds a level of motivation which is likely to increase engagement and might encourage you to use the technology.

'The second other option is to ‘go aggressive’ and opt for planned obsolescence - programming the device to die, such as in the case of the iPhone, which forces the consumer to buy a new version.

'The third is to choose openness, to empower users and third parties to constantly develop the product and platform themselves. By enabling others to innovate and extend the product, you increase engagement from users.'

Balestrini clearly sees the latter as the most sustainable route to ensuring engagement, and a distributed, open approach to innovation is certainly more palatable than the planned obsolescence model. However all of these approaches are worthy of consideration - as the novelty factor has proven, however useful your technology is, there is no guarantee that consumers will stick around for as long as you think.

Behaviour change: what tech start-ups need to do before selling to enterprise