Cipher Surgical completed its latest SyndicateRoom round in February 2017, overfunding to £1,014,150. The company’s first round raised £511,500 in June 2014, to optimise the OpClear® device and to expand its post-launch market, and Cipher returned to SyndicateRoom in April 2015, successfully closing with £514,800.

The OpClear® is an innovative, new technology aiming to transform laparoscopy. During the keyhole surgery procedure, the surgeon relies on a camera attached to a scope to project the operative site onto an external screen. Naturally, the lens of the scope can become obscured by blood, tissue or condensation, all of which will impair the surgeon’s view. The disposable OpClear® product allows surgeons to clean the lens of their laparoscope without disrupting the surgery to improve visibility and patient safety overall. 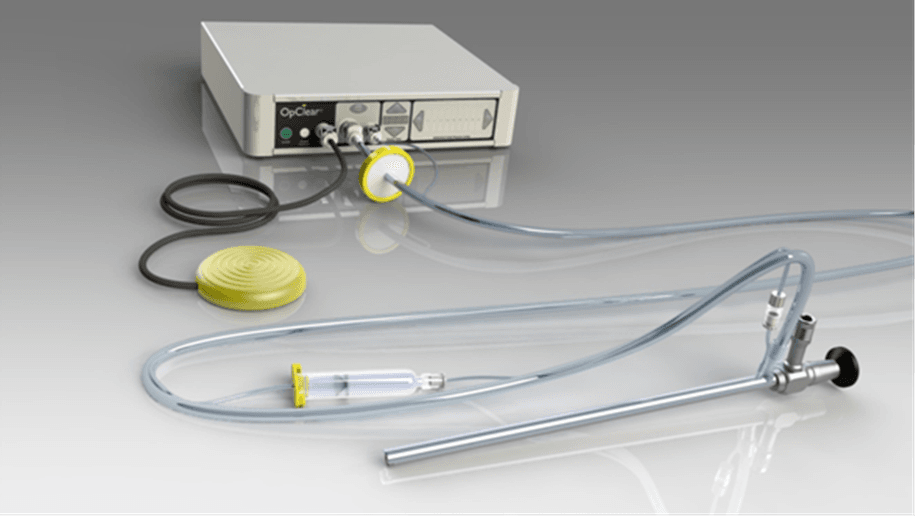 Managing Director Andrew Newell has worked as a venture capitalist for 23 years. Andrew specialises in intellectual property and rights, and most recently in healthcare. He has founded, invested in and advised over 30 companies in Europe, North America and Asia. Operations Director Justin Buch has more than 17 years’ experience in medical devices, managing operations, manufacturing, R&D and new product introductions in both blue-chip organisations and SMEs.

The company's first round raised £511,500 in June 2014 to optimise the OpClear device and to expand its post-launch market.

Since closing their first round on SyndicateRoom, Cipher Surgical has secured Methodist Houston Hospital as its US partner, been granted further patents in Europe & Japan and commenced US FDA approval. Furthermore, the optimised version of OpClear has been successfully tested, and the company has made repeat sales from early adopter accounts (Kings College Hospital).

Having already achieved regulatory approval in Europe, the OpClear has since been used on multiple occasions in the UK. Cipher Surgical has also been granted further patents in Europe and Japan, secured its first international client in Norway, and received enquiries from over 120 surgical distribution companies in 50 countries after attending two leading trade fairs in Dubai and Dusseldorf.

Cipher Surgical completed its third funding round in February 2017, overfunding to £1,014,150. Cipher Surgery plan to use funds raised on SyndicateRoom for future development of the OpClear® and to extend the product portfolio to other scope types.

Cipher Surgical raised with SyndicateRoom for the fourth time in May 2018, raising a total £2,431,720.80. The company intends to use the funds to produce and further develop the OpClear® system, ramp up its sales and marketing efforts and cover operational costs.

Lead investors Martyn Smith and Federico Forcolini have invested £35,100 and £49,500 respectively in the February 2017 funding round for Cipher Surgical.

Martyn Smith has 26 years’ experience in senior management roles at Inchcape plc, John Menzies plc and, most recently, Avis Group Inc where he was HR Director and CFO. An accountant by training, the roles he has undertaken have been generally international in reach and focused on finance, operations and strategy.

In Martyn’s words, Cipher Surgical’s biggest strength lies in ‘the ability of the Opclear product to address the major issue confronting surgeons undertaking these procedures’.

Federico Forcolini has ten years’ background in commercial video production, both in post-production department and as a director. He recently took over a Family Office majorly investing in real estate and agribusiness which he has successfully diversified into early stage companies in a range of industries including Biotech and Medical Devices.

For Federico, the potential return is the single most important deciding factor when considering an investment. In the case of Cipher Surgical, it was the quality of technology, the management team and the potential return that impacted his decision. In his own words, it was Cipher Surgical’s ‘market ready solution in a large market with high need and limited competition’ that particularly motivated him to invest.

Xi'an Lijun Pharmaceutical Co., Ltd, a leading regional pharmaceutical company, was the company's lead investor for its 2018 raise. It believes the OpClear is a unique innovative device with a significant potential to improve laparoscopic surgery. Xi’an Lijun was impressed with the quality of the device, with the progress that Cipher Surgical has made in such a short time on a relatively modest investment, and with the company’s future plans which it considers to be ambitious, scalable and achievable.

‘I am deeply impressed by the innovation of Cipher surgical and I am very confident in the management team. The OpClear has a huge market potential which will ensure that shareholders expectations can be met.’

'I believe we are in a super-accelerated space in technology these days. I love to invest in new technologies and, to know that this is going to help peoples lives, by making medical procedures more efficient, is extremely rewarding. Cipher seem to have a proven technology with a clear market advantage with a large geographic potential base to sell into, including the US, UK, Europe, China and Japan.'