Most of us have heard the anecdote about vast dams in Wales releasing water to provide hydropower to support the National Grid when millions of Britons turn on their kettles during the Coronation Street commercial break.

This is just one example of the National Grid balancing supply with demand of electricity, showing the need for ways to respond to peak demand and effectively store excess energy during periods of low demand. This animation demonstrates exactly how the system works.

Highview is an awardwinning designer and developer of utility-scale energy storage and power systems that use liquefied air as the storage medium. Highview’s solution provides additional flexibility as it goes beyond geography-bound energy storage and uses liquid air which, when reheated, expands significantly, providing the force to drive turbines and support the grid as it balances energy demand and supply.

Prior to this round, Highview had received £17.7m in public and private funding, excluding the recent £8.1m contract with the Department of Energy and Climate Change. 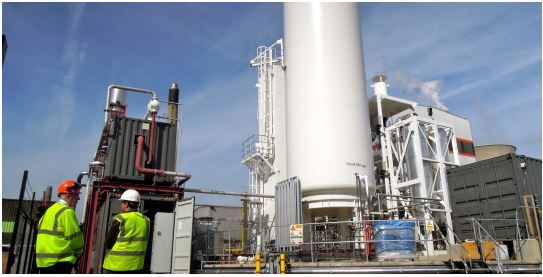 In December 2014 Highview Power Storage signed a licence agreement with leading US clean coal technology provider, Advanced Emissions Solutions, Inc. of Denver, Colorado, through its subsidiary ADA-ES which also invested £1.75m into the company. The licence agreement is for grid-connected LAES non-peaker plant storage applications covering North America (US, Canada and Mexico). ADA-ES, the leading clean coal technology specialists, are broadening their offering with their investment in Highview at a time when energy storage is proving to have a significant role to play in the electricity market, to help balance electricity systems and support intermittent renewables.

In Q4 2016 Highview announced that it will build the world's largest cryogenic energy storage plant near Manchester. Once complete, the new GigaPlant should have enough capacity to help power a city for six hours, says company CEO Gareth Brett.

Details can be found in the following media coverage:

In August 2017, Highview was awarded £1.5 million from Innovate UK for new Hybrid LAES system to respond to frequency response market. The aim of the project is to test performance and economics and it will be operational by Summer 2018.