Tomo is an app that aims to help people manage their mental health through reinforcing healthy habits.

19% of the adult UK population, around 10 million people, show symptoms of depression or anxiety. Enter Tomo. Tomo is an app that helps users manage their mental health. It uses behavioural activation (BA) — a well-established therapy for treating depression and other mental health disorders — to build healthy habits and behaviours that improve wellbeing and productivity.

Tomo uses a machine learning approach to activity suggestion. It asks users to complete activities and submit evidence once they are done. Proof can be as simple as a photo, which is then assessed by other users – peers who are going through the same struggle. Tomo is designed to increase resilience, speed up recovery, and prevent relapse. 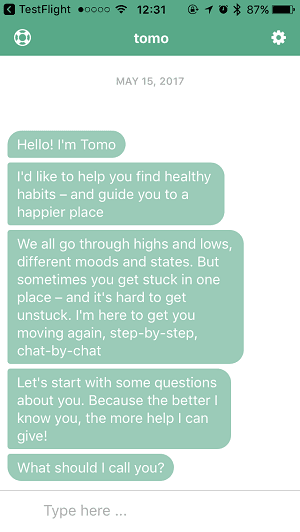 The company is currently running trials to make sure the App knows how best to help users. While this is happening, the app is available for free.

Gus is responsible for management, business development and sales at Tomo. Prior to co-founding the company, he advised on deals in the energy, oil and gas and mining sectors. He previously designed and fundraised for research programmes at the Woolf Institute. Gus holds an MA and MPhil from the University of Cambridge in religion and politics and began his career advising the UK government on inter-faith relations.

Fahad is in charge of product development and scientific validation at Tomo. He is a neuro-biologist, who previously worked at the National Institute of Medical Research and the Institute of Opthalmology as a researcher. He has also advised a fund on STEM investments since 2015. Fahad studied at University College London.

Paolo is director of Activate Media, a co-founding partner of startup studio Activate Capital, and co-founder of the State of the Net conference in Italy. Paolo works as Tomo's CTO managing development teams in London and New Delhi.

Activate Capital is a partnership of experienced tech professionals who run a digital startup studio and development company in London. The lead partner, Greg Rice, has a track record of successful investments in a wide range of sectors over the last 20 years. He has run Activate Media since 1992.

When deciding to invest in a company, Activate is concerned with the team behind the venture; that the technology-led opportunity they are pursuing aspires to have both commercial and social impact; that they understand the market they are hoping to change; and that they are passionate about their idea. Activate invested £50,000 this round.